As the saying goes, everything old is new again.
.
Fashion is one of those things that has been, and always will be, relevant. No matter how many new trends there are, clothes are something we use each and every day. Fashion is always evolving, but sometimes something that seems new to us, isn’t really all that new. Fashion tends to repeat itself. A lot of the trends we know and love today, were the same trends that our grandparents loved too!

Logos are one of the most current trends. Today we see just about every designer adding some sort of logo to their clothing, but logos weren’t always used. So when was the first fashion logo debuted?

In 1927 the French tennis legend Rene Lacoste, brought the famous embroidered crocodile logo to life. The logo was created as a reference to his nickname “The Alligator”. This nickname was given after the tennis star made a bet with his coach over a crocodile suitcase. However, even though the logo was born in 1927, it wasn’t until 1933 that Rene officially launched his classic brand Lacoste. The famous little logo is still used today.

Photo by Queens on Unsplash

Blue means boy, pink means girl, you know how it goes. Well did you know, this actually wasn’t always how it went? As recently as 100 years ago, blue was advertised as the go-to color for girls and pink was the ideal color for boys. The reasoning behind this was that blue was a more light, delicate color making it suitable for a girl, whereas pink was said to be a stronger, more manly color as it’s derived from red. It wasn’t until the 1940s, people widely started using pink and blue to mark the gender of babies the way we do today, with pink being for girls and blue for boys. 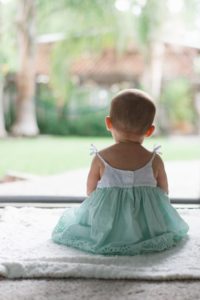 Photo by Picsea on Unsplash

Besides baby clothes, other clothes weren’t always specific to gender in the way they are now. Did you know that dresses and skirts were not always solely for girls? The skirt is actually the second oldest garment, with only underwear predating it. Up until the 1700s men wore them just as often as women did. After that time, wealthier families continued to dress their sons in skirts and dresses until they were about 4 or 5 years old. In fact, these dresses were styled in a way that we would consider as very girly and, the more lacey a dress was, the wealthier the family was. 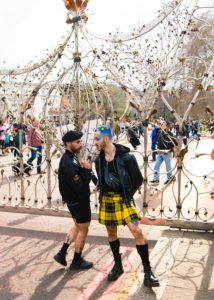 Photo by eddie howell on Unsplash

#4 – HIGH HEELS WITH A PURPOSE

Some fashion trends we still use today were actually designed with a purpose in mind. One of those trends is high heels. In the 16th and 17th century, women would wear shoes with extremely tall platforms. The platforms ranged in sizes but could often be up to 2 feet tall. During these times, women wore big dresses with rather large skirts so they would wear these platform shoes to keep the fabric from touching the ground. The platform shoes, also known as Chopines, were sometimes so tall and heavy that women needed servants just to help them balance! Isn’t that crazy? 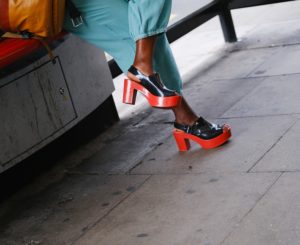 Photo by Kevin Grieve on Unsplash

Our next fact might just make your squirm! So we’ve all heard of fur coats or snakeskin handbags right? Well did you know that in 1894 New Yorkers took it one step further and used real live chameleons as “living jewelry?” That’s right, you could go to the store and buy living chameleons to fasten on your scarf, bodice, or even necklace. Luckily stores quit selling them after the cruel trend was stopped by the Society for the Prevention of Cruelty to Animals. When the trend was banned, there were over 10,000 little chameleons on the loose throughout New York City! 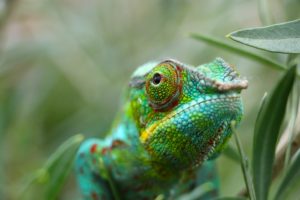 Photo by Pierre Bamin on Unsplash

There will always be some new shocking fashion trend for people to talk about, and in 1946 that trend was the bikini. The bikini was named after a US government site where they performed nuclear testing on 23 nuclear devices. The island was called Bikini Atoll. The designer of the bikini, Louis Reard, wanted the bikini to cause an ‘explosive’ reaction similar to the explosions that took place at the island in the Pacific Ocean. Reard released the famous 2 piece swimsuit on July 5, 1946 only 4 days after the United States initiated its first nuclear weapon test at Bikini Atoll. Due to its name Reard decided to create a two piece and it was so revolutionary and ‘booming’ because it was considered rather scandalous at the time.

Last but not least, have you ever wondered where the term “fashion police” comes from? Well as crazy as it seems, during the 1970s there actually were real fashion police! In South Korea, officers would measure the length of women’s skirts and dresses. These policemen would carry around a measuring tape and stop women on the street to measure the exact length of their garments. If the garments were considered to be too short, women could get fined or sometimes even arrested.
Photo by Sandie Clarke on Unsplash 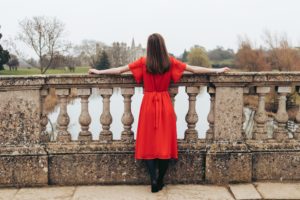 As a lover of fashion I found these facts to be rather interesting and I hope you enjoyed them just as much as I did! So now when you see a women in heels or a baby in blue, you know just how the trend started.

What fun fashion fact did you find the most interesting?